Thriving is Your Destiny By Your Choice 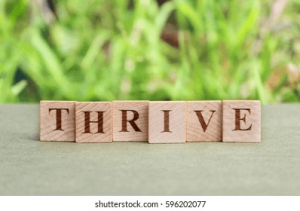 Psychologist and Clinical Hypnotherapist Dr. Anne, PhD. from Spain was our guest on the podcast yesterday. Dr. Anne has devoted her practice to helping women understand when they’re in a toxic relationship by asking them pointed questions that will assist them in coming to their own conclusions about the health of the relationship that they’re in, along with seeing how their emotional and mental health have been compromised by being around someone who treats them badly. It’s always been curious to me that people, including myself, can make excuses for being treated badly and allow it to continue. There are so many reasons why anyone would allow someone to treat them abusively – this is what you learned from your parents as a child; you are predisposed to depression and a feeling of being unworthy of love and respect –  but regardless of the reason, we must deal in present time and get out of that relationship as soon as possible while getting professional guidance to unravel the foundation from which we see ourselves.  Your health and welfare depend on it.

Dr. Anne has a method by which  you can reach The Moment of Reckoning, that “Ah Ha” moment when you see what you never saw before, that you are in an abusive relationship. Maybe not physically, which is the only way some women think of relationship abuse, but the dominant way, emotional abusive. Dr. Anne’s approach includes the following: Helping you reach a state of calm in order to think clearly; providing education to understand your spouse’s behavior; and the tools to manage your new life while leaving the life with your soon to be former spouse.

Once extricated from the relationship, almost guaranteed you’ll end up in a high conflict divorce if you’re connected to an abusive person. What’s a high conflict divorce look like? The divorce never seems to end; you’re constantly being pulled back into court; your legal and court costs are spiraling out of control; and you’re confused about why your spouse isn’t reaching an agreement with you. Dr. Anne’s approach to being in the midst of a high conflict divorce is to first understand it; second, understand the legal and court system; and third, to change your behavior and the way you interface with the legal process in order to have more control in bringing the bad dream to a conclusion. Bad dream to good reality is the goal by harnessing the court system to move the divorce forward; and downsizing your lifestyle temporarily to have the financial independence to be able to make your spouse an offer they can’t refuse while keeping your eye on the real prize, your freedom.  This is how you Thrive!

Dr. Anne speaks firsthand about high conflict relationships and divorces.  While working with women to to get them through their situations, she realized she was in one herself; she was in an abusive marriage. Her litmus test was her own personal life. Dr. Anne is now Thriving with the Freedom to live a much better life in a new relationship and a new sense of self!