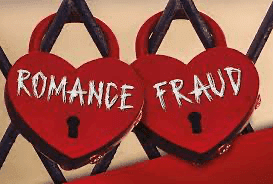 The numbers are staggering: In 2021 $307M was scammed by people who love your money but not you! Say what? Yes. You gave them your heart but all they wanted was your money. If this is you, you’re not alone. You’re in a huge pool of people who fell in love before falling into financial ruin. We want so desperately to be loved, to be wanted, to be in that soulmate relationship to the point of ignoring all the obvious signs that your money, or what you can do dishonestly for someone, is the motivating factor for the relationship, not love of you. Brian Stefan, former intelligence office with the Department of Defense and FBI-Los Angeles Police Department, was our guest this week on THE Amicable Divorce Expert podcast to discuss this phenomenon.

Brian also worked in the private sector with his brother, a detective, who followed romance fraud cases and did the research to show his financially exploited clients who they developed a relationship with, and the track record of their perpetrator. Stefan gave a few ways that people can become scammed:

1. Dating sites trolled by the scammers and waiting for opportunities to lure people into a false sense of trust in order to take advantage of their wealth
2. Loneliness following the death of a spouse in a longterm marriage
3. Thinking that the age difference between you, a person in their 50s or 60s, and an attractive, young 20something good-looking person, is not important
4. Thinking that your wealth is not a motivating factor in the relationship
5. Thinking that your contacts and sphere of professional influence has no bearing on the relationship
6. Asking for money for themselves or their families at the onset of the relationship
7. You are the only one in the relationship that’s earning a living
8. Not offering to share expenses
9. Aborting the standard get-to-know you phase and fast-tracking to marriage
10. Being asked for a series of loans before any of them are paid back
11. There’s no lie and take in the relationship; just you giving

If it seems unbelievable, it more than likely is. If you start feeling like you’re being taken advantage of, you probably are. If you start seeing and feeling that you’re being manipulated, don’t second guess yourself. Run screaming from this person because these relationships don’t end well. You risk financial ruin, disconnection from your family and friends, and possibly suicide. Brian told us a story of a friend of his who was highly successful with a great network of professional contacts, yet allowed herself to commit white collar crimes for her fraudulent “lover” and eventually committed suicide out of fear of going to jail and having her reputation ruined. Yes, a financially fraudulent romance can end in a person taking their own life.

I see it in my divorce practice in immigration marriages. I didn’t know that there was a name for it until recently. But I would see older men in their 60s and 70s, who were either widowers or divorced after a 20 year marriage, and either traveled abroad and met a very young woman who flattered them to the point of forming a relationship with them, or went on an international dating site to meet someone completely different than their former wives, not understanding that professional relationship scammers are lurking and looking for Americans of seriously wealthy means, or Americans who are of middle income means that in relation to the economy of their country, would be considered wealthy.

How do you get out of these marriages? Divorce immediately. How do you get rid of a defrauder in a dating relationship? Stop communicating with them.  Maybe change your phone number and email address. If you’ve sent wire transfers from your bank account abroad, change banks and open new accounts. Hire a private detective if you are fairly wealthy and feel completely trapped in an insane (I use this word specifically) relationship of give and no take. If you are newly married and are seeing that you are being given a nonstop list of financial requests, please remember that violent crime doesn’t just happen on television and in the movies. Violent crime happens in real life. Remember Andrew Cunanan, the assassin of Gianni Versace? That’s the perfect example of a huge age difference, with the older person being wealthy, successful and famous, and the other not; extreme demands being made of the older, famous person by the young exploiter, leading to detachment between the wealthy victim and his/her inner circle of family and friends, and finally death. None of this is normal.
I’ll leave you with the wise words of poet and philosopher, Maya Angelou, “When someone shows you who they are, believe them the first time.” Your gut is your guide, not your heart. Follow the uncomfortable feeling in your stomach. If your relationship has value, you wouldn’t feel taken advantage of. You are not wrong. You are the victim of Romance Fraud & Financial Exploitation!